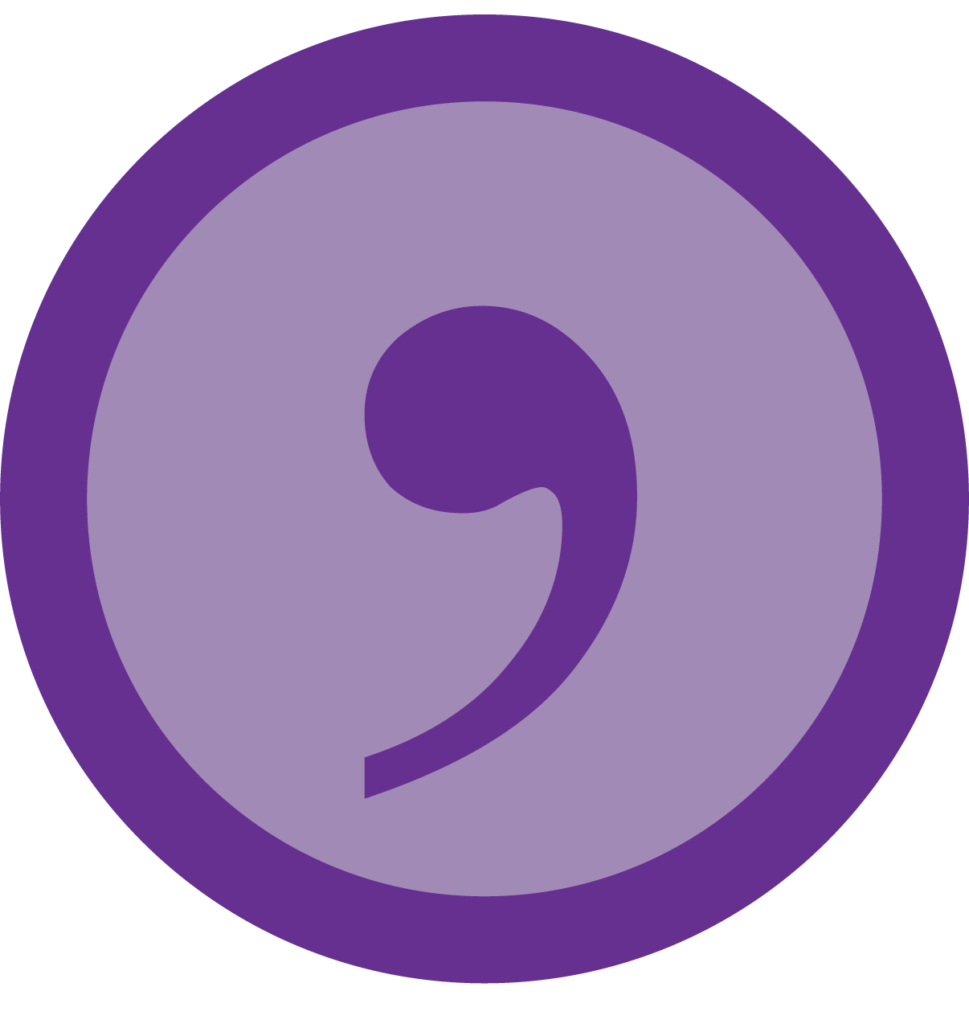 Commas: these little demons haunt the nightmares of many a professor after an evening of reading student papers. It seems nearly impossible to remember and apply the seventeen or so comma rules that seem to given out as the standard. (For example: “Use commas to set off independent clauses joined by the common coordinating conjunctions.” or “Put a comma before the coordinating conjunction in a series.”)

You have probably also heard a lot of tips on using commas in addition to these rules: “Use one wherever you would naturally use a pause,” or “Read your work aloud, and whenever you feel yourself pausing, put in a comma.” These techniques help to a degree, but our ears tend to trick us, and we need other avenues of attack.

Perhaps the best and most instructive way for us to approach the comma is to remember its fundamental function: it is a separator. Once you know this, the next step is to determine what sorts of things generally require separation. This includes most transition words, descriptive words or phrases, adjacent items, and complete ideas (complete ideas contain both a subject and a verb).

Note: As was mentioned, these words require commas at the beginning or middle of a sentence. When they appear between two complete ideas, however, a period or semicolon is required beforehand:

As you can see from these examples, comma is always required after transition words.

In each example, the phrase separated by the comma could be deleted from the sentence without destroying the sentence’s basic meaning. If the information is necessary to the primary sentence meaning, it should not be set off by commas. Let’s look at a quick example of this:

This test can be very helpful when you’re deciding whether or not to include commas in your writing.

Adjacent items are words or phrases that have some sort of parallel relationship, yet are different from each other in meaning. Adjacent items are separated so that the reader can consider each item individually.

The dates (July 4, 1968) and places (Cleveland, Ohio) are juxtaposed, and commas are needed because the juxtaposed items are clearly different from each other. This applies to countries as well as states: “Paris, France, is beautiful this time of year.”

We learned about coordinating conjunctions earlier in the course. These are words that join two words or phrases of equal importance. The mnemonic FANBOYS helps us remember the seven most common: for, and, nor, but, or, yet, and so.

When these conjunctions join two words or phrases, no comma is necessary (for more than two, take a look at “Commas in Lists” just below):

When these conjunctions are used to join two complete ideas, however, a comma is required:

The serial comma is used to separate adjacent items—different items with equal importance—when there are three or more. This is so the reader can consider each item individually. Let’s look at a few examples

The Serial Comma (a.k.a the Oxford Comma)

The serial comma can also prevent the end of a series from appearing to be a parenthetical:

I’d like to thank my sisters, Beyoncé and Rhianna.

By always using a comma before the and in any series of three or more, you honor the distinctions between each of the separated items, and you avoid any potential reader confusion.

Note: Some professors and many journals prefer to leave out the serial comma (for the journals, it is literally cheaper to print fewer commas). Because of this, the serial comma is not recommend in AP style.

A sure way to irritate educated readers of your work is to give them an overabundance of commas. It is easy but dangerous to take the attitude that Sally once did in a Peanuts comic strip, asking Charlie Brown to correct her essay by showing her “where to sprinkle in the little curvy marks.”

Perhaps the best way to troubleshoot your particular comma problems, especially if they are serious, is to identify and understand the patterns of your errors. We tend to make the same mistakes over and over again; in fact, many writers develop the unfortunate habit of automatically putting commas into slots such as these:

Read the following sentences. How many of them have unnecessary commas? Type your corrected sentences in the text frame below?

Show Answer
All of these sentences have extra commas:

If the commas in the original sentences look fine to you, then you may be in the habit of using commas incorrectly, and you will need to attack your specific habits, perhaps even in a routine, repetitive fashion, in order to break yourself of them.

Just as it is common for someone to have to look up the same tricky word dozens of times before committing its proper spelling to memory, you may need to reference comma rules multiple times before they feel natural to use. As with spelling, commas (or the absence of commas) must be repeatedly challenged in your writing.

As you perfect your comma usage, you will learn to recognize and reevaluate your sentence patterns, and the rewards are numerous. There is no foolproof or easy way to exorcise all of your comma demons, but a great place to start is reminding yourself of the comma’s basic function as a separator and justifying the separation of elements. In the end, you simply must make a habit of reading, writing, and revising with comma correctness in mind.