While there are infinite possibilities for sentence construction, let’s take a look at some of the most common punctuation patterns in sentences. In order to do this, let’s first look at this passage about Queen Elizabeth I. You don’t need to pay attention to the words: just look at the punctuation. 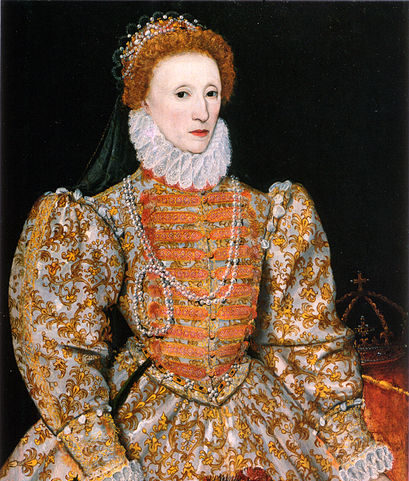 The “Darnley Portrait” of Elizabeth I of England

Elizabeth I was Queen of England and Ireland from 17 November 1558 until her death on March 24, 1603. Elizabeth was the daughter of Henry VIII and Anne Boleyn, his second wife, who was executed two and a half years after Elizabeth’s birth. Sometimes called The Virgin Queen, the childless Elizabeth was the fifth and last monarch of the Tudor dynasty.

Elizabeth’s reign is known as the Elizabethan era. The period is famous for the flourishing of English drama, led by playwrights (such as William Shakespeare and Christopher Marlowe) and for the seafaring prowess of English adventurers (such as Francis Drake). Towards the end of her reign, a series of economic and military problems weakened her popularity. Elizabeth is acknowledged as a charismatic performer and a dogged survivor in an era when government was ramshackle and limited, and when monarchs in neighboring countries faced internal problems that jeopardized their thrones. After the short reigns of Elizabeth’s half-siblings, her 44 years on the throne provided welcome stability for the kingdom and helped forge a sense of national identity.

Now let’s look at the passage with the words removed:

As you can see, this passage has a fairly simple punctuation structure. It simply uses periods, commas, and parentheses. These three marks are the most common punctuation you will see. Some other common sentence patterns include the following: