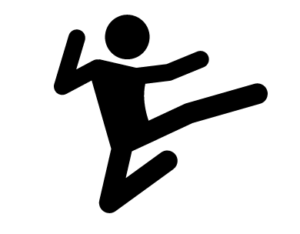 Active verbs are the simplest type of verb: they simply express some sort of action. Watch this video introduction to verbs:

Let’s look at the example verbs from the video one more time:

All of these verbs are active verbs: they all express an action.

Identify the active verbs in the following sentences:

This video provides a more in-depth explanation of transitive and intransitive verbs and how they work:

Read the following sentences. Are the verbs in each transitive or intransitive?

Multi-word verbs a subclass of active verbs. They are made up of multiple words, as you might have guessed. They include things like stirfry, kickstart, and turn in. Multi-word verbs often have a slightly different meaning than their base parts. Take a look at the difference between the next two sentences:

Let’s look at another example:

Can you see how the same principles apply here? Other multi-word verbs include find out, make off with, turn in, and put up with.