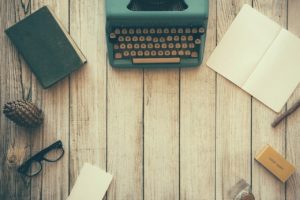 Although at its most basic level a synthesis involves combining two or more summaries, synthesis writing is more difficult than it might at first appear because this combining must be done in a meaningful way and the final essay must generally be thesis-driven.  In composition courses, “synthesis” commonly refers to writing about printed texts, drawing together particular themes or traits that you observe in those texts and organizing the material from each text according to those themes or traits.  Sometimes you may be asked to synthesize your own ideas, theory, or research with those of the texts you have been assigned. In your other college classes you’ll probably find yourself synthesizing  information from graphs and tables, pieces of music, and art works as well.  The key to any kind of synthesis is the same.

You’re in a college composition course, and the first thing you’re asked to do is learn how to synthesize.  What does this even mean???? 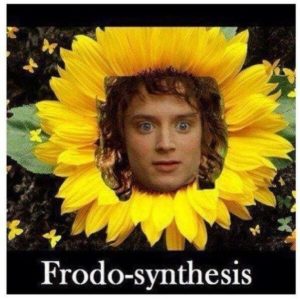 No, unfortunately, Frodo has nothing to do with synthesis, unless you’re researching the goings-on of Middle Earth.

Synthesis, in its dictionary definition, is learning how to actively engage in various texts, think critically about authors’ different perspectives, and develop our own meanings.

So let’s break this down.

(1) The first step in synthesis is to have at least two sources.  Sometimes, your instructor will provide these texts for you.  Other times, you will find them on your own through something we like to call research.

(2) The second step in synthesis is reading, annotating, and analyzing the two texts.  This involves close reading, or what I like to call reading with a pen.  When you read with a pen, you are able to mark passages of significance and make notes (also called annotations) that will help you synthesize the reading later.

Synthesis is NOT Summary 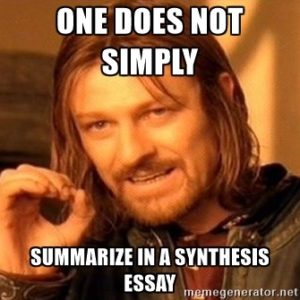 Synthesizing is analyzing.  Once you’ve recognized shared traits or themes in your two sources, then it is time to create your own truth from these two sources.  The final part of synthesizing two sources (and all of this must be done before you ever sit down to actually write a response or essay) is the act of creating something new through the integration of these two texts or sources.

For example, if one text calls for allowing more Syrian refugees into U.S. borders and another calls for stricter restrictions on immigration from Syria, you would find your own truth about the issue, based on reading the two sources.  This “truth” is essentially your thesis statement for a synthesis essay.

The kernel essay as a pre-writing strategy.

What is a kernel essay?  A kernel essay is a shortened form of a broader essay (usually a paragraph long) that emphasizes understanding how to format a claim (also known as thesis statement) and provide evidence for that claim.  The goal is that a kernel essay could then be extended into a full essay.  So how do I organize this?

In Charlie Beck and Connie Rice’s “How Community Policing Can Work” and Charles M. Blow’s “Romanticizing ‘Broken Windows’ Policing,” all three authors discuss the need for programs that bring attention to wrongful use of force among police.  However, each source focuses on a different program:  Beck and Rice highlight the positive aspects of “guardian policing” while Blow criticizes the negative aspects of “broken windows policing.”  Though different programs have advantages and disadvantages, I think all authors could agree that exploring programs to help reduce violent crime as well as police use-of-force is necessary in combating many tragedies we see in America today; however, the focus of what causes violence in communities may be skewed.

Beck and Rice, one the “chief of the Los Angeles Police Department” and one a “civil rights lawyer,” provide evidence that guardian policing, which consists of having police officers establish trust with residents in high crime neighborhoods in Los Angeles, has been found to reduce the number of murders as well as the number of police shootings.  In fact, since it began in one particular neighborhood named Watts, there have been “no shootings by the partnership officers in over five years” (Beck and Rice).

Charles M. Blow, though clearly an advocate for programs that would train officers in ways that may reduce their use-of-force in unnecessary situations, asks us to be wary before simply accepting any program as the savior for today’s problems.  He highlights a misguided program called “broken windows policing” for targeting certain racial groups, primarily African American communities, as violent, when that’s not necessarily the case.  He writes, “How you view “broken windows” policing completely depends on your vantage point, which is heavily influenced by racial realities and socio-economics,” (Blow) and emphasizes the need for police officers to view effects of poverty before tying violence to race.

Both texts make valid points for the need for more programs to help reduce unnecessary use-of-force among police.  Though Blow’s piece is focused more on racial discrimination, he highlights strong points about the role poverty plays in a lot of these situations.  At its heart, poverty, which is cyclical, and the implications of poverty should be taken into consideration as police officers work to combat violence within and outside of these communities.

Okay, I’ve got the “bones” for a synthesis essay.  Now how do I write the real thing?

Expanding the Kernel Essay into a Synthesis Essay

In the introduction of a synthesis response, you will want to introduce the texts that are being synthesized as well as offer any pertinent summaries of the texts or background information.  The background info/summaries should be brief.  Be sure to fully identify each source with authors’ and titles.  Then, offer a statement or series of statements that sum up the focus of your synthesis.

This should be organized by theme, point, similarity, or aspect of the topic. Your

organization will be determined by the assignment or by the themes or traits you see in your sources.

Be sure that each paragraph: 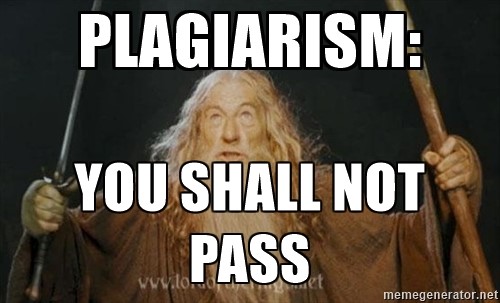 When you have finished your paper, write a conclusion reminding readers of the most significant themes you have found and the ways they connect to the overall topic. You may also want to suggest further research or comment on things that it was not possible for you to discuss in the paper.

The basic steps of synthesis are… 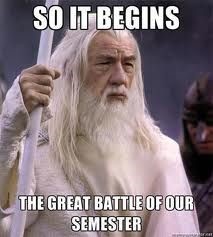