The Purpose of Comparison and Contrast in Writing

The key to a good compare-and-contrast essay is to choose two or more subjects that connect in a meaningful way. The purpose of conducting the comparison or contrast is not to state the obvious but rather to illuminate subtle differences or unexpected similarities. For example, if you wanted to focus on contrasting two subjects you would not pick apples and oranges; rather, you might choose to compare and contrast two types of oranges or two types of apples to highlight subtle differences. For example, Red Delicious apples are sweet, while Granny Smiths are tart and acidic. Drawing distinctions between elements in a similar category will increase the audience’s understanding of that category, which is the purpose of the compare-and-contrast essay.

Brainstorm an essay that leans toward contrast. Choose one of the following three categories. Pick two examples from each. Then come up with one similarity and three differences between the examples.

Brainstorm an essay that leans toward comparison. Choose one of the following three items. Then come up with one difference and three similarities.

The Structure of a Comparison and Contrast Essay

The compare-and-contrast essay starts with a thesis that clearly states the two subjects that are to be compared, contrasted, or both and the reason for doing so. The thesis could lean more toward comparing, contrasting, or both. Remember, the point of comparing and contrasting is to provide useful knowledge to the reader. Take the following thesis as an example that leans more toward contrasting.

Thesis statement: Organic vegetables may cost more than those that are conventionally grown, but when put to the test, they are definitely worth every extra penny.

Here the thesis sets up the two subjects to be compared and contrasted (organic versus conventional vegetables), and it makes a claim about the results that might prove useful to the reader.

You may organize compare-and-contrast essays in one of the following two ways:

See Figure 10.1 “Comparison and Contrast Diagram”, which diagrams the ways to organize our organic versus conventional vegetables thesis. 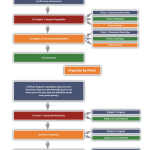 The organizational structure you choose depends on the nature of the topic, your purpose, and your audience.

Given that compare-and-contrast essays analyze the relationship between two subjects, it is helpful to have some phrases on hand that will cue the reader to such analysis. See Table 10.3 “Phrases of Comparison and Contrast” for examples.

Table 10.3 Phrases of Comparison and Contrast

Writing a Comparison and Contrast Essay

First choose whether you want to compare seemingly disparate subjects, contrast seemingly similar subjects, or compare and contrast subjects. Once you have decided on a topic, introduce it with an engaging opening paragraph. Your thesis should come at the end of the introduction, and it should establish the subjects you will compare, contrast, or both as well as state what can be learned from doing so.

The body of the essay can be organized in one of two ways: by subject or by individual points. The organizing strategy that you choose will depend on, as always, your audience and your purpose. You may also consider your particular approach to the subjects as well as the nature of the subjects themselves; some subjects might better lend themselves to one structure or the other. Make sure to use comparison and contrast phrases to cue the reader to the ways in which you are analyzing the relationship between the subjects.

After you finish analyzing the subjects, write a conclusion that summarizes the main points of the essay and reinforces your thesis. See Chapter 15 “Readings: Examples of Essays” to read a sample compare-and-contrast essay.

Many business presentations are conducted using comparison and contrast. The organizing strategies—by subject or individual points—could also be used for organizing a presentation. Keep this in mind as a way of organizing your content the next time you or a colleague have to present something at work.

Choose one of the outlines you created in Note 10.75 “Exercise 3”, and write a full compare-and-contrast essay. Be sure to include an engaging introduction, a clear thesis, well-defined and detailed paragraphs, and a fitting conclusion that ties everything together.

By Scott McLean in Writing for Success

Both Washington, DC, and London are capital cities of English-speaking countries, and yet they offer vastly different experiences to their residents and visitors. Comparing and contrasting the two cities based on their history, their culture, and their residents show how different and similar the two are.

Both cities are rich in world and national history, though they developed on very different time lines. London, for example, has a history that dates back over two thousand years. It was part of the Roman Empire and known by the similar name, Londinium. It was not only one of the northernmost points of the Roman Empire but also the epicenter of the British Empire where it held significant global influence from the early sixteenth century on through the early twentieth century. Washington, DC, on the other hand, has only formally existed since the late eighteenth century. Though Native Americans inhabited the land several thousand years earlier, and settlers inhabited the land as early as the sixteenth century, the city did not become the capital of the United States until the 1790s. From that point onward to today, however, Washington, DC, has increasingly maintained significant global influence. Even though both cities have different histories, they have both held, and continue to hold, significant social influence in the economic and cultural global spheres.

Both Washington, DC, and London offer a wide array of museums that harbor many of the world’s most prized treasures. While Washington, DC, has the National Gallery of Art and several other Smithsonian galleries, London’s art scene and galleries have a definite edge in this category. From the Tate Modern to the British National Gallery, London’s art ranks among the world’s best. This difference and advantage has much to do with London and Britain’s historical depth compared to that of the United States. London has a much richer past than Washington, DC, and consequently has a lot more material to pull from when arranging its collections. Both cities have thriving theater districts, but again, London wins this comparison, too, both in quantity and quality of theater choices. With regard to other cultural places like restaurants, pubs, and bars, both cities are very comparable. Both have a wide selection of expensive, elegant restaurants as well as a similar amount of global and national chains. While London may be better known for its pubs and taste in beer, DC offers a different bar-going experience. With clubs and pubs that tend to stay open later than their British counterparts, the DC night life tend to be less reserved overall.

Both cities also share and differ in cultural diversity and cost of living. Both cities share a very expensive cost of living—both in terms of housing and shopping. A downtown one-bedroom apartment in DC can easily cost $1,800 per month, and a similar “flat” in London may double that amount. These high costs create socioeconomic disparity among the residents. Although both cities’ residents are predominantly wealthy, both have a significantly large population of poor and homeless. Perhaps the most significant difference between the resident demographics is the racial makeup. Washington, DC, is a “minority majority” city, which means the majority of its citizens are races other than white. In 2009, according to the US Census, 55 percent of DC residents were classified as “Black or African American” and 35 percent of its residents were classified as “white.” London, by contrast, has very few minorities—in 2006, 70 percent of its population was “white,” while only 10 percent was “black.” The racial demographic differences between the cities is drastic.

Even though Washington, DC, and London are major capital cities of English-speaking countries in the Western world, they have many differences along with their similarities. They have vastly different histories, art cultures, and racial demographics, but they remain similar in their cost of living and socioeconomic disparity.

Ellen Laird compares and contrasts traditional and distance education in I’m Your Teacher, Not Your Internet-Service Provider:

Deborah Tannen compares and contrasts conversation styles in Sex, Lies and Conversation: Why Is It So Hard for Men and Women to Talk to Each Other?