Verbs are crucial to expressing a sentence’s meaning, so it is important to use them correctly.

A verb is a word that expresses an action, describes an occurrence, or establishes a state of being. Every sentence needs at least one verb, which is paired with the subject. All verbs have tense, aspect, and mood, of which there is a wide variety of combinations. These concepts are part of the foundation of accurately expressing your thoughts in writing.

Tense indicates when the action expressed by a verb takes place. The three simple tenses are past, present, and future.

Different tenses take different verb forms, either by changing the word itself or by adding helping verbs. There is no single formula for how to change verb tenses. Here are a few examples:

Past tense is used for actions that started and finished in the past.

Future tense expresses an action or event that will take place in the future.

“Verbal aspect” refers to the timing of the verb. More specifically, it addresses whether the action occurs in a single block of time, continuously, or repetitively. All verbs have both tense and aspect. Verbal aspect consists of simple, progressive, perfect, or perfect progressive, where each refers to a different fabric of time.

The simple aspect is used to express a single action, a repeated action, or a permanent state.

The progressive aspect is used to talk about continuous events.

The perfect aspect is used to discuss completed actions. It is often formed by the verb have combined with a past tense verb.

Verb mood is to the “attitude” of the verb. More specifically, “mood” refers to the degree of necessity, obligation, or probability. Is it a statement of fact? Is it a command? Mood can be expressed in any verb tense. The three main moods used in English are indicative, subjunctive, imperative.

The indicative mood is used for factual statements.

The subjunctive mood is for hypothetical situations, emotions, or making requests. It is often (but not always) paired with a clause containing would, should, or could, or an if-then statement.

The imperative mood is used to give commands.

Linking verbs are used to connect subjects with their complements. They may be the main verb in a sentence, even if they express a description rather than an action. The most common linking verb is to be, which takes many different forms:

Other common linking verbs include the following:

Linking verbs take no direct objects. Consequently, if a sentence’s main verb is a linking verb, it cannot be written in the passive voice.

Transitive verbs describe actions that are done to a specific thing, called the verb’s direct object.

All of the verbs are performed by the subject, to something or someone else.

Intransitive verbs are actions that are complete on their own, and do not require any object:

Most verbs can be classified as transitive or intransitive, depending on their context. Just remember, if your verb has an object, make sure it’s clear to the reader: Don’t say “Sally kissed her” if you don’t know who “her” is! 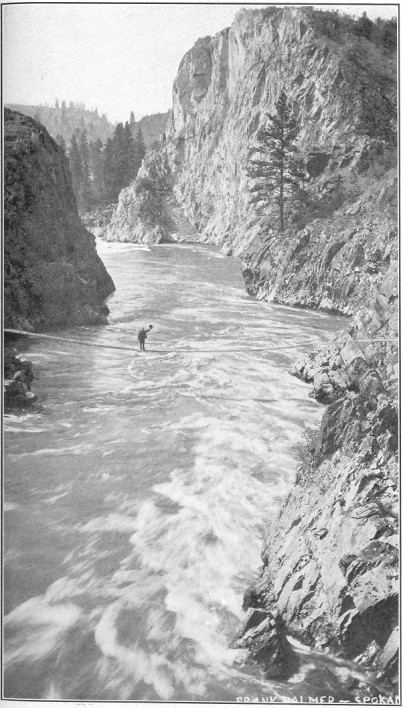 He walked the wire: The verb tense in the title signals that this action took place in the past. It is not only important to have subject and verb agreement, but also to utilize the correct verb tense to ensure that a sentence contains its intended meaning.

Verb Tense: Past, Present, and Future

Verb tense indicates whether the action of a sentence occurred in the past, present, or future.

Identify the tense of a verb

The verbs is, paint, and hears are in the simple present tense. They refer to actions that are occurring in the present.

To show that the action is continuous the verbs reading, running, and working are paired with the appropriate form of the verb to be (am, is, are).

The present perfect expresses a completed event that is still relevant to the present.

In these examples, have and has are paired with read, seen, and sampled to show readers that these actions began in the past and are still occurring in the present.

Finally, the present perfect progressive expresses a continuous action that began in the past and continues into the present.

The present perfect progressive tense combines have/has with been and the verb to show that the action began in the past and is still occurring in the present.

First, the simple past expresses a past event:

The verbs read, took, and sat are in the past tense to show these actions have already occurred.

The past progressive expresses a continuous action in the past:

In the past progressive tense, the primary action verbs (in this case giving, downloading, and growing) are paired with the past tense of the verb to be (was/were) to show that the action occurred continually in the past.

The past perfect expresses a completed action from the past.

This verb tense uses had, paired with a verb, to show that the verb is a completed action.

The past perfect progressive expresses a continuous, completed action that had taken place in the past.

The past perfect progressive tense combines have/has with been and the past tense of the verb (listening, running, standing) to show that the action occurred continually in the past until the action was completed.

The simple future expresses an action that will take place in the future.

To show that these actions take place in the future, the verbs are paired with will.

The future progressive expresses a continuous action which will take place in the future.

To show that the action is continuous and in the future, the verbs are paired with will be, and to show that they are progressive, the main verb ends in -ing.

The future perfect expresses a completed action that will have taken place in the future.

In these examples, will and have are paired with the main verb to show readers that these actions will take place in the future, but will have already occurred.

Lastly, the future perfect progressive tense expresses a continuous, completed action that will have taken place in the future. 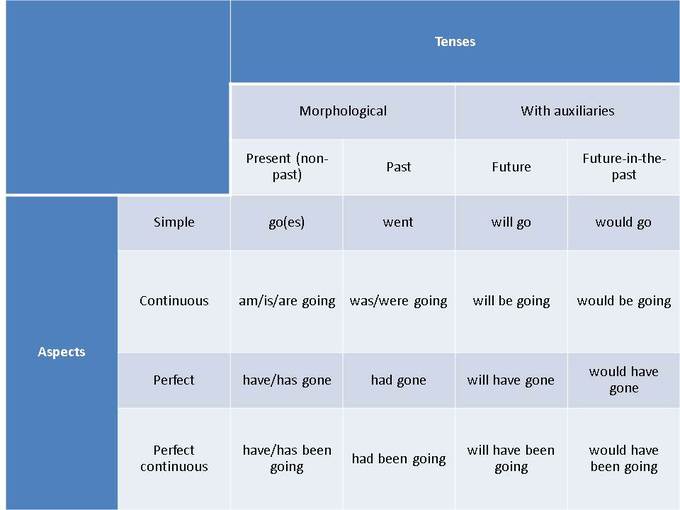 Verb tense: The table shows how to correctly format verbs in a given tense. The “continuous” aspect is another name for the progressive aspect.

Identify the aspect of a verb

We need tense to know if an event took place in the past, present, or future, but that’s not all we need in order to know what happened. Aspect gives us additional information about a verb by telling us whether the action was completed, continuous, neither, or both.

“Aspect” refers to the flow of time. Does the action take place in a single block of time, does the action occur continuously, or is the action a repetitive occurrence? There are four main aspects: simple, progressive, perfect, and perfect progressive.

Since all verbs have both tense and aspect, all combinations of tenses and aspects, such as past progressive and future perfect, are possible. Think about it this way: tense tells us when an action began, and aspect tells us whether that action was continuous, completed, or something else.

The simple aspect describes a general action, one that is neither continuous nor completed. It is usually used to describe an action that takes place habitually.

Verbs in simple past describe a normal or habitual action that began in the past,  and used to happen but no longer does.

Verbs in simple present describe a habitual action that still occurs in the present.

The progressive form expresses continuous actions that happen over a period of time. They almost always involve some combination of the verb “to be” paired with the main verb ending in -ing.

Past progressive verbs express actions that began in the past and were continuous, but did not continue into the present. In the past progressive tense, the main verb is paired with the past tense of the verb “to be” (was/were) to show that the action occurred continually in the past.

The perfect form refers to events that have been completed, but are still relevant to the speaker in the present moment. It almost always involves some form of the verb “have” combined with another verb.

Verbs in past perfect express an action that both began and was completed in the past. Use “had” paired with the main verb in simple past tense.

Verbs in present perfect express actions that began in the past, and have just now been completed. Use “has” or “have” paired with the main verb in simple past tense.

Verbs in future perfect express actions that will be completed in the future. Use “will have” paired with the main verb in simple past tense.

Verbs in past perfect progressive express a continuous, completed action that had taken place in the past. Use “had been” combined with the -ing form of the main verb.

Verbs in present perfect progressive express a continuous action that began in the past and continues into the present. Use “has been” or “have been” combined with the -ing form of the main verb.

Verbs in future perfect progressive express a continuous, completed action that will have taken place in the future. Use “will have been” combined with the -ing form of the main verb.

Grammatical mood is a verb feature that allows speakers to express their attitude toward what they are saying.

Identify the mood of a verb

Grammatical mood allows speakers and writers to express their attitudes toward what they are saying (for example, whether it is intended as a statement of fact, of desire, or of command). In English, there are many grammatical moods, but by far the most common are the indicative, the imperative, the subjunctive, and the conditional.

In English, the indicative mood is the most commonly used. It is used to express factual statements.

The imperative mood expresses direct commands, prohibitions, and requests. In other words, it is used to tell someone to do something. In the imperative mood, the subject is almost always implied to be “you.”

However, sometimes the subject can be implied to be “we.” 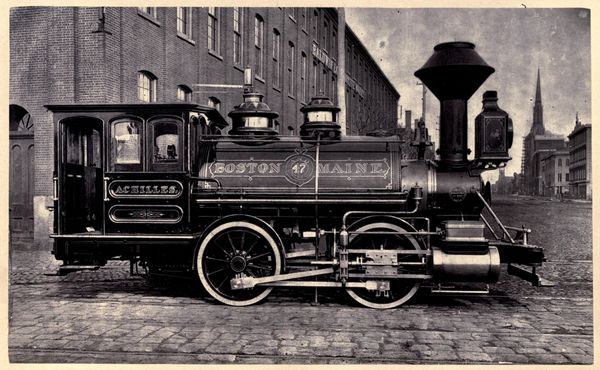