Other Kinds of Poems

Ekphrastic poetry is a poem that describes a piece of artwork: a painting, a sculpture, a photograph, etc. The writer, inspired by the artwork, creates a poem usually starting with a description of the artwork. For example, Edwin Markham wrote” The Man with the Hoe” after seeing Millet’s painting. 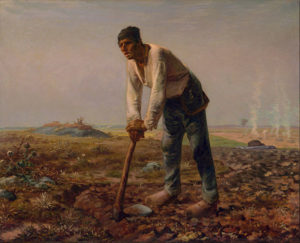 The Man with the Hoe by Jean Francois Millet

The Man with the Hoe
Author: Edwin Markham
©1899

Written after seeing Millet’s World-Famous Painting
God made man in His own image,
in the image of God made He him.—Genesis.

Bowed by the weight of centuries he leans
Upon his hoe and gazes on the ground,
The emptiness of ages in his face,
And on his back the burden of the world.
Who made him dead to rapture and despair,
A thing that grieves not and that never hopes,
Stolid and stunned, a brother to the ox?
Who loosened and let down this brutal jaw?
Whose was the hand that slanted back this brow?
Whose breath blew out the light within this brain?

Is this the Thing the Lord God made and gave
To have dominion over sea and land;
To trace the stars and search the heavens for power;
To feel the passion of Eternity?
Is this the Dream He dreamed who shaped the suns
And pillared the blue firmament with light?
Down all the stretch of Hell to its last gulf
There is no shape more terrible than this—
More tongued with censure of the world’s blind greed—
More filled with signs and portents for the soul—
More fraught with menace to the universe.

What gulfs between him and the seraphim!
Slave of the wheel of labor, what to him
Are Plato and the swing of Pleiades?
What the long reaches of the peaks of song,
The rift of dawn, the reddening of the rose?
Through this dread shape the suffering ages look;
Time’s tragedy is in that aching stoop;
Through this dread shape humanity betrayed,
Plundered, profaned and disinherited,
Cries protest to the Judges of the World,
A protest that is also prophecy.

O masters, lords, and rulers in all lands,
Is this the handiwork you give to God,
This monstrous thing distorted and soul-quenched?
How will you ever straighten up this shape;
Touch it again with immortality;
Give back the upward looking and the light;
Rebuild in it the music and the dream;
Make right the immemorial infamies,
Perfidious wrongs, immedicable woes?

O masters, lords, and rulers in all lands,
How will the Future reckon with this Man?
How answer his brute question in that hour
When whirlwinds of rebellion shake the world?
How will it be with kingdoms and with kings—
With those who shaped him to the thing he is—–
When this dumb Terror shall reply to God,
After the silence of the centuries?

A found poem is written by taking words, phrases, sentences, titles, etc. from another piece of literature, a newspaper, a journal article, or a speech. If the piece was prose, line breaks and stanzas are created, and unnecessary words are deleted. For example, Hart Seely and Tom Peyer found a poem in the commentary of Phil Rizzuto, who spoke on the death of the Yankees catcher Thurman Munson.

The Yankees have had a traumatic four days.
Actually five days.
That terrible crash with Thurman Munson.
To go through all that agony,
And then today,
You and I along with the rest of the team
Flew to Canton for the services,
And the family…
Very upset.

You know, it might,
It might sound a little corny.
But we have the most beautiful full moon tonight.
And the crowd,
Enjoying whatever is going on right now.
They say it might sound corny,
But to me it’s like some kind of a,
Like an omen.

Both the moon and Thurman Munson,
Both ascending up into heaven.
I just can’t get it out of my mind.
I just saw the full moon,
And it just reminded me of Thurman Munson,
And that’s it.

The list poem is exactly what it states. It’s a list. Generally, the writer creates images by using lists of specific nouns that are interconnected to one another. For example, Robert Louis Stevenson wrote “Picture Books in Winter.” Notice the nouns listing what is in the book.

Water now is turned to stone
Nurse and I can walk upon;
Still we find the flowing brooks
In the picture story-books.

All the pretty things put by,
Wait upon the children’s eye,
Sheep and shepherds, trees and crooks,
In the picture story-books.

We may see how all things are,
Seas and cities, near and far,
And the flying fairies’ looks,
In the picture story-books.

How am I to sing your praise,
Happy chimney-corner days,
Sitting safe in nursery nooks,
Reading picture story-books?