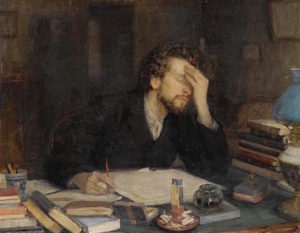 The Passion of Creation by Leonid Pasternak, a Russian post-impressionist painter

What Is Writer’s Block?

Writer’s block is the inability to write because the writer doesn’t know what to write, doesn’t know how to proceed in a piece of writing, or doesn’t have the confidence to write. The condition can last for several minutes to days to weeks, and even months and years for some writers.

Often, the inner critic, a still, small, critical voice that sends negative messages to the brain, keeps writers from writing. Those negative statements may sound something like this:

How Do Writers Overcome Writer’s Block?

Writers who succeed are the ones who have the drive to push through their writer’s block. Here are some suggestions for overcoming writer’s block: