You have no doubt been drilled on the need for a thesis statement and its proper location at the end of the introduction. And you also know that all of the key points of the paper should clearly support the central driving thesis. Indeed, the whole model of the five-paragraph theme hinges on a clearly stated and consistent thesis. However, some students are surprised—and dismayed—when some of their early college papers are criticized for not having a good thesis. Their professor might even claim that the paper doesn’t have a thesis when, in the author’s view it clearly does. So, what makes a good thesis in college?

Linen served as a form of currency in the ancient Mediterranean world, connecting rival empires through circuits of trade.

Linen served as a form of currency in the ancient Mediterranean world, connecting rival empires through circuits of trade. The economic role of linen raises important questions about how shifting environmental conditions can influence economic relationships and, by extension, political conflicts.

Putting your claims in their broader context makes them more interesting to your reader and more impressive to your professors who, after all, assign topics that they think have enduring significance. Finding that significance for yourself makes the most of both your paper and your learning.

How do you produce a good, strong thesis? And how do you know when you’ve gotten there? Many instructors and writers find useful a metaphor based on this passage by Oliver Wendell Holmes, Sr.[2]: 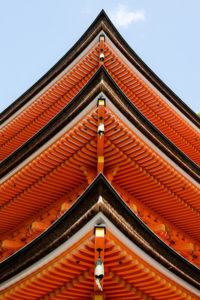 The biggest benefit of the three-story metaphor is that it describes a process for building a thesis. To build the first story, you first have to get familiar with the complex, relevant facts surrounding the problem or question. You have to be able to describe the situation thoroughly and accurately. Then, with that first story built, you can layer on the second story by formulating the insightful, arguable point that animates the analysis. That’s often the most effortful part: brainstorming, elaborating and comparing alternative ideas, finalizing your point. With that specified, you can frame up the third story by articulating why the point you make matters beyond its particular topic or case.

For example, imagine you have been assigned a paper about the impact of online learning in higher education. You would first construct an account of the origins and multiple forms of online learning and assess research findings about its use and effectiveness. If you’ve done that well, you’ll probably come up with a well considered opinion that wouldn’t be obvious to readers who haven’t looked at the issue in depth. Maybe you’ll want to argue that online learning is a threat to the academic community. Or perhaps you’ll want to make the case that online learning opens up pathways to college degrees that traditional campus-based learning does not. In the course of developing your central, argumentative point, you’ll come to recognize its larger context; in this example, you may claim that online learning can serve to better integrate higher education with the rest of society, as online learners bring their educational and career experiences together.

To outline this example:

Here’s another example of a three-story thesis:[4]