This activity is not graded. The text fields below are purely for self-reflection; you do not need to submit anything for this assignment. 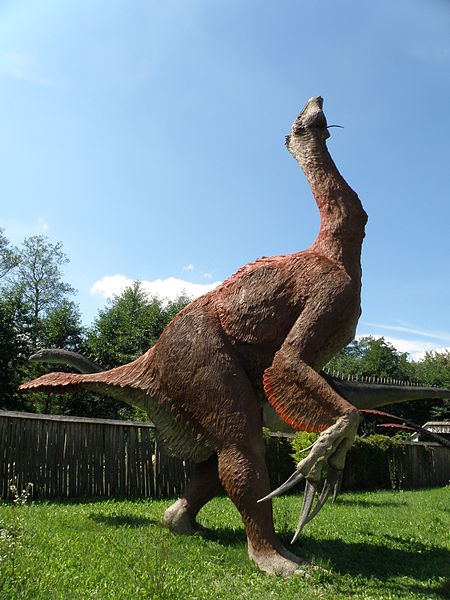 A statue of a Therizinosaurus in JuraPark Bałtów, a dinosaur themed park in Poland.

(1) Therizinosaurs were some of the true freaks of the dinosaur world. (2) I mean that in the nicest possible way for something that looked like the sick offspring of a giant chicken and Freddie Kruger. (3) Perhaps the weirdest things about them were their long, scythe-like claws.

(4) But how diverse were the claws of these evolutionary oddities? (5) What does this imply for how they were used? (6) Previously, it has been suggested that these claws—which could measure over half a meter in length—were used for probing insect colonies for food, sexual display, climbing trees sort of like a sloth, stripping bark from trees, or harvesting vegetation. (7) These guys were pretty much the dinosaurian ranch farmers of their time.

(8) To figure out exactly what function therizinosaur claws had, a shape analysis combined with a mechanical test on 65 different theropod species—the group therizinosaurs belong to and which includes all the other meat-eating dinos—was used by Stephan Lautenschlager.

Sentence 8 is passive. Incidentally, this is a poor sentence. it makes much more sense as an active sentence: “To figure out exactly what function therizinosaur claws had, Stephan Lautenschlager used a shape analysis combined with a mechanical test on 65 different theropod species—the group therizinosaurs belong to and which includes all the other meat-eating dinos.”

What is the passive voice doing in this sentence? Type your answers in the text frame below:

From Passive to Active