Supersize Stadium, With Helping of Sprawl

Supersize Stadium, With Helping of Sprawl
By NICOLAI OUROUSSOFF SEPT. 17, 2009 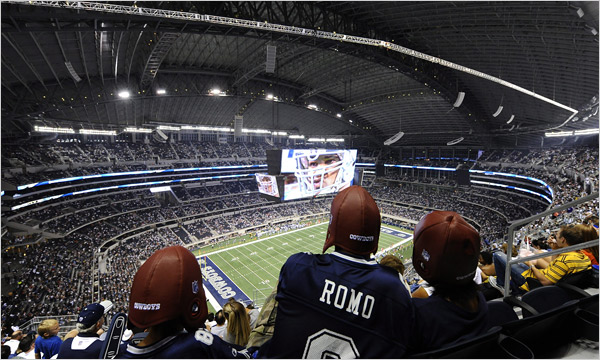 Cowboys Stadium has more than 80,000 seats, a four-sided video board and a retractable roof. Credit Larry W. Smith/European Pressphoto Agency
ARLINGTON, Tex. — Here’s one thing that can be said for the new Cowboys Stadium, where the Dallas Cowboys will play their first home game of the regular season on Sunday against the Giants: it’s not Mickey Mouse architecture.

With a $1.15 billion price tag and a flying saucer-like form, the stadium’s design mercifully avoids the aw-shucks, small-town look that has become common in many American stadiums over the years. There’s no brick cladding, no fake wrought ironwork, no infantilizing theme restaurants that seem as if they had been commissioned by Uncle Walt for the Happiest Place on Earth.

Still, Cowboys Stadium suffers from its own form of nostalgia: its enormous retractable roof, acres of parking and cavernous interiors are straight out of Eisenhower’s America, with its embrace of car culture and a grandiose, bigger-is-better mentality. The result is a somewhat crude reworking of old ideas, one that looks especially unoriginal when compared with the sophisticated and often dazzling stadiums that have been built in Europe and the Far East over the last few years. Worse for fans, its lounges and concourses are so sprawling that I suspect more than a few spectators will get lost and miss the second-half kickoff. 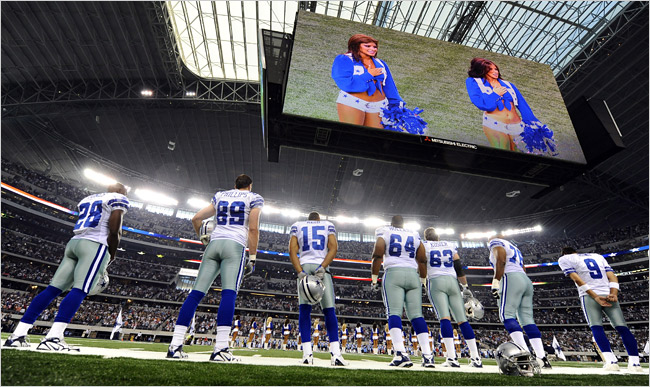 Fans can view giant images from the video board, but it hangs so low that a punter hit it in a preseason game. Credit Larry W. Smith/European Pressphoto Agency
At one point, it looked as if the stadium might be built in a more contained urban setting. Jerry Jones, the team’s owner, considered situating it in Fair Park, a 277-acre park near downtown Dallas whose many Art Deco buildings, including the Cotton Bowl, were built for the 1936 Texas Centennial Exposition. That location would not only have contributed to the revival of the park’s derelict landmarks, but it would also have helped spark the revitalization of one of the city’s poorest neighborhoods.

But the city rejected the plan as too costly, and Jones was forced to look farther afield, eventually settling on a generic suburban enclave midway between Dallas and Fort Worth, not far from the ballpark where the Texas Rangers play.

Compared with the retro brick facing and quaint castle towers of Rangers Ballpark in Arlington, Cowboys Stadium, designed by HKS, which has its headquarters in Dallas, does have a certain boldness. Approached from Interstate 30, its massive dome brings to mind the simple geometries and aggressive modern aesthetic of Houston’s Astrodome and the Louisiana Superdome.

Two brawny steel trusses, each a quarter-mile long, run the length of the stadium, their arched forms supporting the shallow bowl of the roof and anchoring the structure at either end. The trusses line up with the sides of the field, dividing the stadium into three segments. The central zone, which is meant to be light and transparent, is covered by the translucent retractable roof and punctuated by towering glass walls just outside each end zone. The side areas, more opaque, enclose the majority of the more than 80,000 seats. 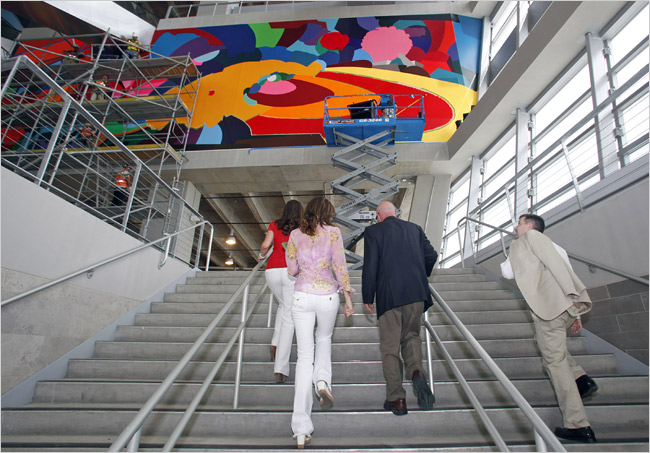 More than a dozen works by contemporary artists have been installed at Cowboys Stadium, including one by Franz Achermann. Credit Sharon Ellman/Associated Press
The idea is to evoke, through the architecture, the relentless flow of movement up and down the field. On a bright day, light pours onto it through the translucent roof and big glass walls. When weather permits, the walls can slide open to connect the concourses to a big paved plaza at each end of the stadium, creating the illusion that the field extends toward infinity.

But as far as architecture goes, that’s about it. Walk around to either side of the structure and you’re confronted with what looks like a conventional suburban office park. The facade is organized in a standard three-part arrangement, with a canted wall of white fritted glass set on a limestone base and topped by a recessed band of windows. A service road encircles the structure, surrounded by endless expanses of parking. A few lonely trees only draw attention to the absolute joylessness of the scene.

At first, things seem more promising inside. Monumental concrete staircases and circulation ramps are situated near the four corners of the field. The ramps, which are some of the building’s most enjoyable architectural spaces, look broad enough to fit a pair of Cadillacs. Jones has also commissioned more than a dozen works by well-known contemporary artists for the stadium interiors, including a spectacularly colorful abstract composition by Franz Ackermann that decorates one of the staircases. But the vastness of the concourses, some of them 65 feet wide, can make you feel as if you are lost in an international airport terminal. And, as in almost every American stadium today, the seats are broken up by bands of glass-encased corporate suites. The glass can slide open so that wealthy patrons can feel connected to the action on the field — if not to the average fan. Some of the suites even take up prime real estate along the sidelines, a first for the N.F.L.

As it turns out, the biggest controversy so far about the stadium has to do with its supersize scale. The four-sided video board over the field is so big, and hangs so low, that a Tennessee punter hit it during a preseason game. It’s a nice irony that for all the space, there may not be enough room at Cowboys Stadium to play a game.