In APA style, the sources you cite in your paper are listed all together at the end, in the References section.

The top of the page, as the rest of your paper, should still include the running header on the left and the page number on the right. On the first line, the title of the page—“References”—should appear centered and not italicized or bolded. (As is the case with the “Abstract” page title, this does not count as an actual heading, so it is not formatted per the heading guidelines.) And, like the rest of your paper, this page should also be double-spaced.

Starting on the next line after the page title, your references should be listed in alphabetical order by author. Multiple sources by the same author should be listed chronologically by year within the same group.

Each reference should be formatted with what is called a hanging indent. This means the first line of each reference should be flush with the left margin (i.e., not indented), but the rest of that reference should be indented one inch from the left margin. Any word-processing program will let you format this automatically so you don’t have to do it by hand. (In Microsoft Word, for example, you simply highlight your citations, click on the small arrow right next to the word “Paragraph” on the home tab, and in the popup box choose “hanging indent” under the “Special” section. Click OK, and you’re done.) 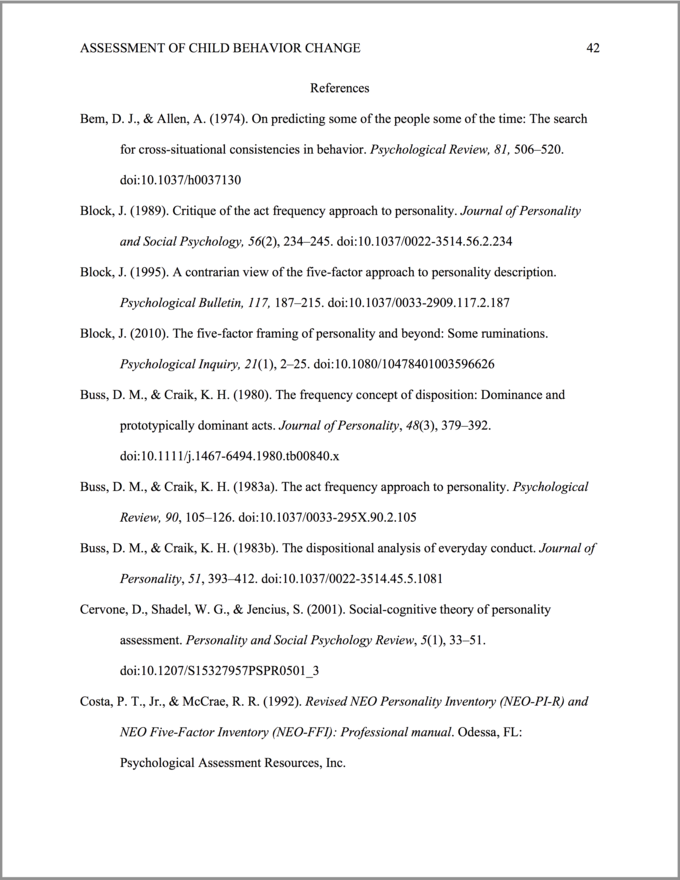 References: This is an example of the first page of a References section properly formatted in APA style.

The first step in building each individual citation is to determine the type of resource you are citing, since in each citation style formatting differs slightly based on source type. Some common types are a book, a chapter from a book, a journal article, an online book or article, an online video, a blog post, and personal communication such as an email or an interview you conducted. (You’ll notice that “website” is not a category by itself. If the information you found is online, you want to determine if you’re looking at an online book, an online article, or some other type of document.)

As an example, let’s look in detail at the process of citing three particular sources in APA style: Joseph Conrad’s Heart of Darkness (i.e., a book by one author), Project Gutenberg’s online text of the same book (i.e., an online book), and an online journal article about the book.

After the author’s name, you provide the year, inside parentheses, in which the source was published, followed by a period. It may look odd, but make sure your period is outside the parentheses.

Next, you should include the title of the source in sentence case. For a book, the title is italicized.

Next, you want to provide the location of the publisher’s office. The location is generally a city, such as “London” or “New York, NY.”

Next, provide the publisher’s name, followed by a period:

Now let’s take a look at the citation for the online version of the same book, available online through Project Gutenberg (gutenberg.org). Much of the citation is the same:

Much of this citation will look familiar to you now that you know the basics. Again, we start with the author information. This article has multiple authors, so we list them in the same order in which they are listed in the source, and in the same format as before (last name, first initial, middle initial), separated by commas. The last author should also have an “and” sign, or ampersand (&), before it. Here we have only two authors, but if we had five, the ampersand would come before the fifth author’s last name, after the comma following the fourth author’s name.

The new information here begins with citing the journal this article is from. Include the title of the journal in italicized title case (all major words capitalized, as in the title of a book), followed by a comma:

Then include the journal volume, also italicized:

If the particular journal you’re citing lists an issue number in addition to the volume number, as this one does, include it in parentheses immediately after the volume, and do not italicize it. Then follow it with a comma.

Finally, list the page numbers of the article, followed by a period [note that the dash between the first and second numbers is an en-dash (–), not a hyphen (-) or em-dash (—)]:

Multiple Publications by the Same Author in the Same Year

If you are referencing multiple publications by the same author (or group of authors) that were published in the same year, there is a special rule for denoting this. You should first order those articles alphabetically by source title in the References section. Then, append a lowercase letter in alphabetical order to the end of each year of publication:

A Note on Capitalization

In the guidelines for citing different types of sources in APA style, you will notice several different patterns in capitalizing source titles. A work that stands on its own—a book, a painting, a film, etc.—should be written in italicized title case (every major word capitalized). A source that is part of a larger work—a chapter in an anthology, an article in a journal, a web page, etc.—should be written in sentence case and not italicized. (Recall that sentence means that just the first word and proper nouns are capitalized, as well as the first word after a colon, if there are any). As an example, compare the citations of Heart of Darkness and the NooriBerzenji & Abdi (2013) article.

APA: How to Reference Different Types of Sources

In APA style, there are different formats for citing sources at the end of your paper depending on the type of source.

Now that you know the different components of a book citation in APA style and how they should be formatted, you will be able to understand the citation formats for other source types. Here are some example citations for the most common types of resources you will use.

Book by One Author

Kurosawa, J., & Armistead, Q. (1972). Hairball: An intensive peek behind the surface of an enigma. Hamilton, ON: McMaster University Press.

List the first six authors, then an ellipsis, then the final author.

Article in an Edited Book

Article in a Journal with Continuous Pagination

Article in a Journal Paginated Separately

Article in an Internet-Only Journal

Page on a Web Site

Page on a Web Site, No Author Identified, No Date

In APA style, there are different formats for citing sources in text depending on the type of source. 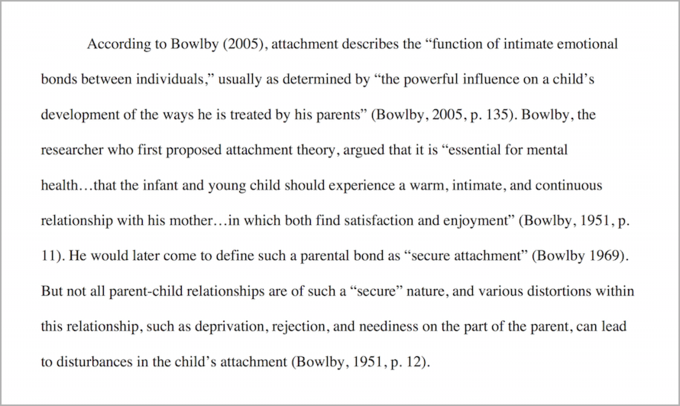 Source by a Single Author

To cite this type of reference in the text, you should use what is known as a parenthetical —the citation information enclosed in parentheses—at the end of the relevant sentence. The parenthetical should include the author’s last name (with no first or middle initial), followed by a comma, followed by the year the source was published. If you’re citing a direct quote, you also need to include the page number. For example:

If you choose, you can integrate the author’s name into the sentence itself—this is known as a ” signal phrase “—and provide just the year in parentheses:

Authors should be presented in the order in which they are listed on the published article. If you include the authors’ names in the parenthetical, use an ampersand (&) between the two names. For example:

If you choose to use a signal phrase instead, use the word “and” rather than an ampersand:

Source by Three to Five Authors

For an article with three to five authors, the first time you cite the article in the text of your paper, you should include the names of all the authors (in the same order in which they appear in the article) followed by the year of publication. After that, to save space and to make your paper easier to read, you should use only the first author’s name followed by “et al.” and the year of publication. (“Et al.” is short for “et alia,” which means “and other people” in Latin—much like “etc.” is short for “et cetera,” which means “and other things” in Latin.)

Subsequent Instances in the Same Document

Source by More than Five Authors

For an article with more than five authors, include only the first author’s name followed by “et al.” and the year of publication in each in-text citation.

If you need to cite multiple publications by different authors in the same sentence, you should list the multiple sources in alphabetical order by author and use a semicolon to separate them.

If within this citation you also have multiple sources by the same author, after that author’s name separate the multiple dates of publication with a semicolon and order them chronologically (earliest to latest).

Multiple Publications by the Same Author

If an author has multiple publications which you wish to cite in the same sentence, you use a semi colon (;) to separate the years of publication in chronological order (oldest to most recent).

Multiple Publications by the Same Author/s in the Same Year

If multiple publications by the same author (or group of authors) were published in the same year, there is a special rule for denoting this. In the References section, you would order those articles alphabetically by source title, and then append a lowercase letter in alphabetical order to the end of the year of publication. For example, if you had two publications by Pauling in 2004, the first would be marked as (2004a) and the second as (2004b). You would then include these lowercase letters in your in-text citations as well: