A paper in Chicago/Turabian style has a title page that follows specific formatting rules.

Arrange the title page correctly in a Chicago-style paper

The following information should be centered horizontally on the title page:

These elements should not be bolded, underlined, or italicized. Note that the requirements may be different for doctoral theses or dissertations. 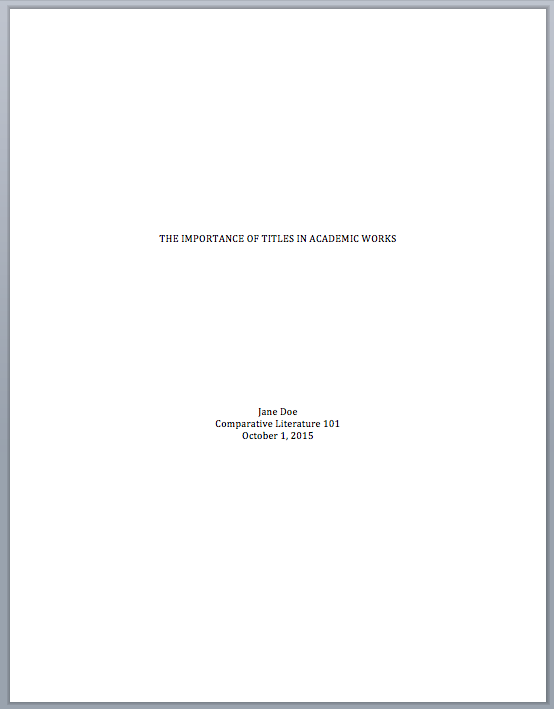 Chicago-style title page: A title page introduces the title of your paper—and you, its author!

In Chicago style, headings are used to organize your writing and give it a hierarchical organization.

In Chicago style, headings are used to organize your writing and give it a hierarchical organization. Chicago style puts forth specific rules for formatting headings (up to five levels) within your paper:

Chicago heading hierarchy: These are the formatting rules for different levels of headings in APA style.

If a heading is said to be in title case, that means you should format it as though it were the title of a book, with the first letters of most major words capitalized (e.g., A Study of Color-Blindness in Dogs).

If a heading is said to be in sentence case, that means you should format it as though it were a normal sentence, with only the first letter of the first word (and of any proper nouns) capitalized (e.g., A study of color-blindness in dogs).

In Chicago style, format quotations of more than five lines as block quotations.

Recognize when to use block quotations in Chicago/Turabian

When to Use a Block Quotation

For example, if you wanted to quote the first two sentences of Thomas Paine’s “Common Sense”, you would begin that quotation on its own line, indent every line, and format it as follows:

Perhaps the sentiments contained in the following pages, are not YET sufficiently fashionable to procure them general favour; a long habit of not thinking a thing wrong, gives it a superficial appearance of being right, and raises at first a formidable outcry in defense of custom. But the tumult soon subsides. (Paine)

The full reference for this source would then be included in your References section at the end of your paper. 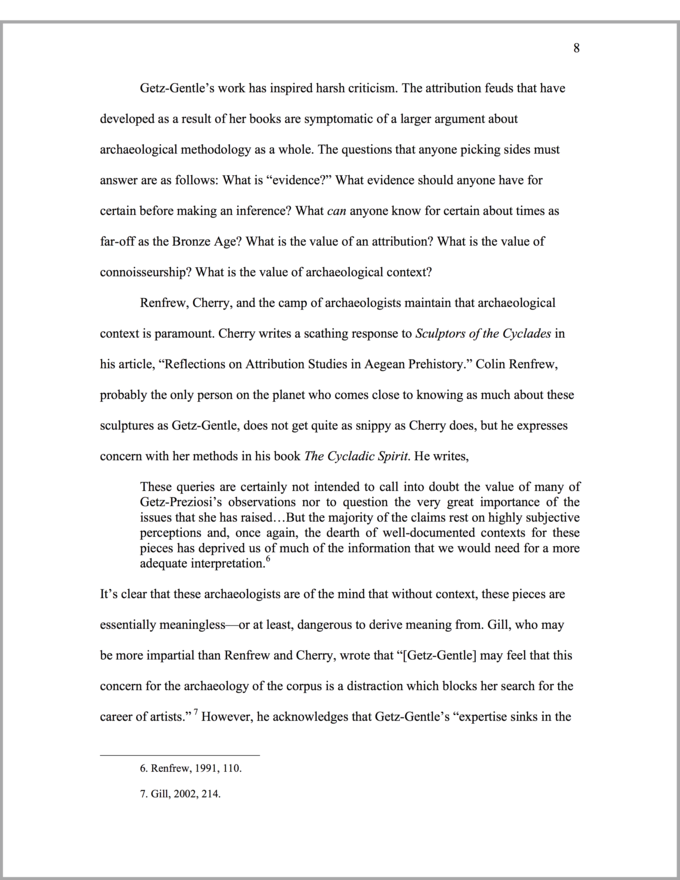 Chicago/Turabian style has specific rules for formatting tables and figures.

When you need to summarize quantitative data, words can only go so far. Sometimes, using a chart, graph, or other visual representation can be useful in proving your point. However, it’s important to make sure you incorporate this extra information in a way that is easy to understand and in line with the conventions set forth in Chicago/Turabian style.

A table is a chart that presents numerical information in a grid format. In Chicago/Turabian style, you must present a table immediately following the paragraph in which you mentioned it. When you mention a table in the text of your paper, make sure you refer to it by its number (e.g., “Table 1”) rather than with a phrase like “the table below” or “this table.”

Format your tables as simply as possible. Do not use bold or italicized text, and do not overuse borders. Generally, you should have only three horizontal lines in your table: one immediately above and one immediately below the column headings, and one at the bottom of the table, to help separate it from the surrounding text. However, Chicago style does allow two exceptions: you may use an additional horizontal line if (1) you need to separate added numbers from their total, or (2) if you have multiple levels of column headings within a table.

Every table should appear flush with the left margin. Immediately above the table, provide its number, followed by a colon, followed by a short but descriptive title:

Immediately below the table, write the word “Source” (or or “Sources”) in italics, followed by a colon, and then provide the source(s) of the information in the table. Include the same information, with the same formatting, as in a parenthetical citation —i.e., the author ‘s last name and the page number. End this line with a period:

Be sure to also include the full citation for this source in your References or Bibliography section. Neither the title nor the source line should be double-spaced. 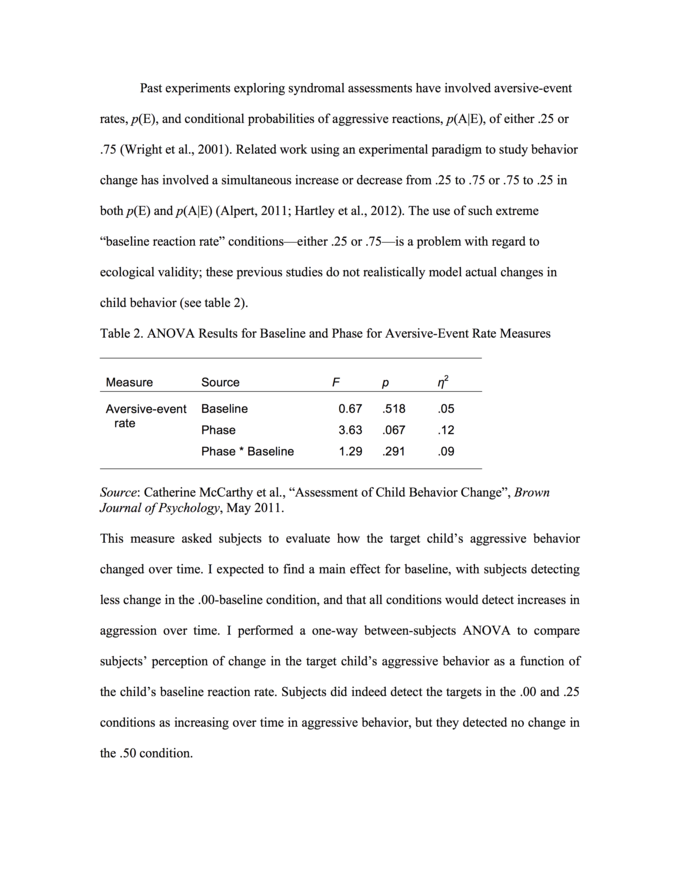 Sample table: This table is formatted correctly according to Chicago/Turabian formatting rules.

Treat a figure much as you would treat a table, with two exceptions: (1) you should present a figure immediately after you have referenced it in the text, and (2) all information about the figure, including its number (“Figure 1”) and title (“Frogs in the Willamette River, 2012”) should appear on the line immediately below the figure. The source information should appear on the next line. 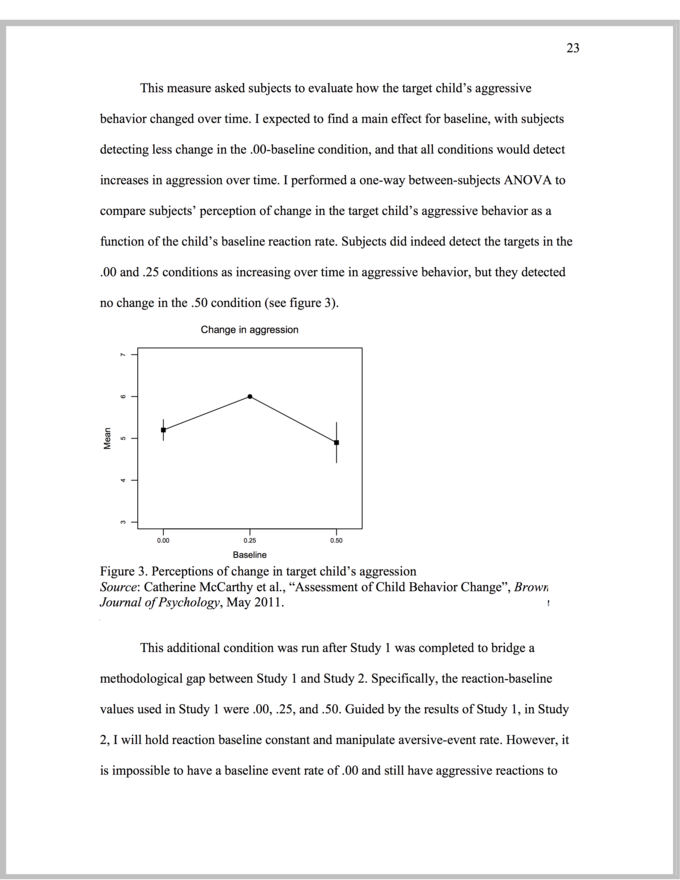 Sample figure: This figure is formatted correctly according to Chicago/Turabian formatting rules.