3.F: Finding Sources: Using the Library versus the Internet for Research (guidelines)

The Internet:  The Researcher’s Challenge

Most students, when assigned any kind of research for a class, will open Google and begin their search. However, along with the distinction between primary and secondary sources and the distinction between scholarly and non-scholarly publications, students need to consider a relatively new type of research source as they gather evidence: the Internet, particularly the World Wide Web.  The Internet started almost 30 years ago, and elements like electronic mail (“email”) and bulletin board newsgroup discussions have been around for quite some time.
Widespread use of the Internet really took off in the early 1990s with the development of the World Wide Web and browser software like Mosaic, Netscape, and Internet Explorer.  In fact, the Web has become such a powerful research resource that many beginning research writing students wonder why they should go to the library at all.
The Web has become such a powerful medium in part because it has such a far reach—literally, anyone anywhere in the world who is connected to the World Wide Web with the right computer and the right software can access almost any of the hundreds of millions of “pages” and other documents on the Web.  But it also has grown so quickly because it is relatively easy to put documents on to the Web. 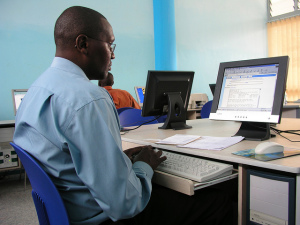 Nowadays, the Web has become dominated by corporate and “mainstream” sites that are advertised on television and in traditional magazines and newspapers, which means that it is difficult for an individual’s Web site to compete with the Web sites of The New York Times or amazon.com.  But individuals can still publish their own Web sites, and individually published Web sites can still attract a large and international audience.
Indeed, one of the great strengths of the World Wide Web is that just about anyone can put up “professional looking” Web pages that can reach a potential audience of millions.  However, this strength of the Web is also its weakness, at least as far as being a good place to look for research because anyone can publish what appears to be a “professional” Web site, regardless of his or qualifications.
This fact means the Web is significantly different from more traditional sources of research.  Most scholarly publications are closely scrutinized by editors and other scholars within a particular field.  Further, the articles that appear in even the most non-scholarly of popular sources pass through a variety of different writers and editors before they make it to press.
The problem with many Web pages is that the review process and editors that we assume to be in place with traditional print sources are simply not there. For example, it would be easy for me to fabricate a Web site (complete with charts, graphs, and fake statistics) that argued that students and teachers who used this textbook became more fit, richer, and better-looking.  Such inaccurate claims would never pass the review process of a scholarly journal or a popular magazine–with the possible exception of the sort of tabloid we all see at the grocery store check-out that reports on Elvis sightings.  But on the Web, it is just another page which, if someone finds it “believable,” could be included in someone’s research writing.
More seriously, many deceptive and “professional” looking Web pages present very  inaccurate and misleading information and they are not intended to be jokes.  Some of these pages are the work of various hate groups—racists or Holocaust deniers, for example—and some of these sites seem to be the work of con artists.  But when these sites are read uncritically, they can cause serious problems for academic researchers.
Of course, not everything you find on the Web is untrustworthy.  Far from it.  For one thing, the lines between what counts as an Internet source and a more traditional “print” source are beginning to blur.  There are numerous online databases available in many libraries that have complete text versions of articles from academic and popular periodicals, and the articles from these databases are every bit as reliable as the traditional print sources.
Additionally, more and more traditional print sources are creating and maintaining Web sites.  Almost all of the most popular news magazines, newspapers, and television networks have Web pages that either reproduce information available in more traditional formats or that publish articles specifically for the Web.  More and more scholarly publications are becoming available on the Web as well, and considering the international reach and low cost of publishing on the Web, it seems inevitable that more (maybe most) academic journals will eventually move from being traditional print journals to ones available only online.

According to Amy Guptill, an increasingly popular article database is Google Scholar. It looks like a regular Google search, and it aspires to include the vast majority of published scholarship. Google doesn’t share a list of which journals they include or how Google Scholar works, which limits its utility for scholars. Also, because it’s so wide-ranging, it can be harder to find the most appropriate sources. However, to cast a wide net, it’s a very useful tool.

Conversely, not everything you find in traditional print publications—either scholarly or non-scholarly—is always accurate and truthful.  Despite the safeguards that most academic and popular publications follow to ensure they publish truthful and accurate articles, there are all sorts of examples of inaccuracies in print.
More common and therefore perhaps more problematic, small errors and misrepresentations appear in both academic and popular sources, evidence that the process of editorial review is not perfect.  And what “counts” as true or accurate in many fields is a question of some debate and uncertainty, and this is frequently reflected in published articles of all sorts.
Here’s the point:  The best way to ensure that your evidence is reliable, regardless of where that evidence is found, is to seek out a variety of different types of evidence and to think critically about the quality and credibility of your sources.  This is particularly true with Web-based research.

Campus libraries pay big money to subscribe to databases for Tier 1 articles. Some are general purpose databases that include the most prominent journals across disciplines8, and some are specific to a particular discipline.9 Often they have the full-text of the articles right there to save or print. We won’t go over particular databases here because every campus has different offerings.  Many libraries also have online research guides that identify the best databases for the specific discipline and, perhaps, the specific course. Librarians are eager to help students succeed with their research—it’s their job and they love it!—so don’t be shy about asking.

Most students will engage with the subscription article databases at different points in the research process. For example, imagine a student has been assigned a research paper that can focus on any topic relevant to the course. Imagine further that she doesn’t have a clue about where to start and isn’t entirely sure what counts as an appropriate topic in this discipline. A great approach is to find the top journals in the specific field of the course and browse through recent issues to see what people are publishing on.

When looking for a set of sources for a topic, the biggest challenge is finding the right keywords to find the most relevant and helpful sources. Students obviously start with words and phrases from the assignment prompt, but they should not stop there. As explained above, lower tier sources (such as Wikipedia) or the top-tier sources are helpful for identifying alternative keywords, and librarians and other library staff are also well practiced at finding new approaches to try. Librarians can identify the best databases for a topic as well.

Finding good sources is a much more creative task than it seems on the face of it. It’s an extended problem-solving exercise, an iterative cycle of questions and answers. Beginning with Wikipedia to get broadly informed is acceptable. It won’t corrupt. But use it, and all other sources, strategically. Students should eventually arrive at a core set of Tier 1 sources that will enable them to make a well informed and thoughtful argument to support a thesis. It’s also a good sign when students realize that some of the first sources found are no longer relevant to the thesis; that likely means that they have revised and specified their thinking and are well on their way to constructing the kind of self-driven in-depth analysis that professors are looking for.