Chapter 2: OUR READING and WRITING PROCESSES

2.C What is the Connection between Critical Reading and Writing?

From Reading to Writing

Reading and writing are the two essential tools of learning. Critical reading is not a process of passive consumption, but one of interaction and engagement between the reader and the text. Therefore, when reading critically and actively, it is important not only to take in the words on the page, but also to interpret and to reflect upon what is read through writing and discussing it with others.

PART I:  Critical Readers Understand the Difference Between Reacting and Responding to A Text

As stated earlier in the previous chapter, actively responding to difficult texts, posing questions, and analyzing ideas presented in them is the key to successful reading. The goal of an active reader is to engage in a conversation with the text he or she is reading. In order to fulfill this goal, it is important to understand the difference between reacting to the text and responding to it.

Reacting to a text is often done on an emotional, rather than on an intellectual level. It is quick and shallow. For example, if we encounter a text that advances arguments with which we strongly disagree, it is natural to dismiss those ideas out of hand as not wrong and not worthy of our attention. Doing so would be reacting to the text based only on emotions and on our pre-set opinions about its arguments. It is easy to see that reacting in this way does not take the reader any closer to understanding the text. A wall of disagreement that existed between the reader and the text before the reading continues to exist after the reading.

Responding to a text, on the other hand, requires a careful study of the ideas presented and arguments advanced in it. Critical readers who possess this skill are not willing to simply reject or accept the arguments presented in the text after the first reading right away. To continue with our example from the preceding paragraph, a reader who responds to a controversial text rather than reacting to it might apply several of the following strategies before forming and expressing an opinion about that text.

Taking all these steps will help the reader to move away from simply reacting to a text and towards constructing informed and critical response to it.

To better understand the key differences between reacting and responding and between binary and nuanced reading, consider the table below.

Critical readers learn to avoid simple “agree-disagree” responses to complex texts. Such way of thinking and arguing is often called “binary” because is allows only two answers to every statement and every questions. But the world of ideas is complex, and a much more nuanced approach is needed when dealing with complex arguments.

When students are asked to “critique” a text, which readers are often asked to do, it does not mean that they have to “criticize” it and reject its argument out of hand. What students are being asked to do instead is to carefully evaluate and analyze the text’s ideas, to understand how and why they are constructed and presented, and only then develop a response to that text. Not every text asks for an outright agreement or disagreement. Sometimes, we as readers are not in a position to either simply support an argument or reject it. What we can do in such cases, though, is to learn more about the text’s arguments by carefully considering all of its aspects and to construct a nuanced, sophisticated response to them. Then it will still be possible to disagree with the arguments presented in the reading because our opinion about the text will be much more informed and nuanced than if we simply agree or disagree.

To illustrate the principles laid out in this section, consider the following two reading responses. Both texts respond to a very well known piece, “A Letter from Birmingham Jail,” by Martin Luther King, Jr. In the letter, King responds to criticism from other clergymen who had called his methods of civil rights struggle “unwise and untimely.” Both student writers were given the same response prompt:  “After reading King’s piece several times and with a pen or pencil in hand, consider what shapes King’s letter. Specifically, what rhetorical strategies is he using to achieve a persuasive effect on his readers? In making your decisions, consider such factors as background information that he gives, ways in which he addresses his immediate audience, and others. Remember that your goal is to explore King’s text, thus enabling you to understand his rhetorical strategies better.”

Student “A” Response:
Martin Luther King Jr’s “Letter from Birmingham Jail” is a very powerful text. At the time when minorities in America were silenced and persecuted, King had the courage to lead his people in the struggle for equality. After being jailed in Birmingham, Alabama, King wrote a letter to his “fellow clergymen” describing his struggle for civil rights. In the letter, King recounts a brief history of that struggle and rejects the accusation that it is “unwise and untimely.” Overall, I think that King’s letter is a very rhetorically effective text, one that greatly helped Americans to understand the civil rights movement.

Student “B” Response:
King begins his “Letter from Birmingham Jail” by addressing it to his “fellow clergymen.” Thus, he immediately sets the tone of inclusion rather than exclusion. By using the word “fellow” in the address, I think he is trying to do two things. First of all, he presents himself as a colleague and a spiritual brother of his audience. That, in effect, says “you can trust me,” “I am one of your kind.” Secondly, by addressing his readers in that way, King suggests that everyone, even those Americans who are not directly involved in the struggle for civil rights, should be concerned with it. Hence the word “fellow.” King’s opening almost invokes the phrase “My fellow Americans” or “My fellow citizens” used so often by American Presidents when they address the nation.

King then proceeds to give a brief background of his actions as a civil rights leader. As I read this part of the letter, I was wondering whether his readers would really have not known what he had accomplished as a civil rights leader. Then I realized that perhaps he gives all that background information as a rhetorical move. His immediate goal is to keep reminding his readers about his activities. His ultimate goal is to show to his audience that his actions were non-violent but peaceful. In reading this passage by King, I remembered once again that it is important not to assume that your audience knows anything about the subject of the writing. I will try to use this strategy more in my own papers.

In the middle of the letter, King states: “The purpose of our direct-action program is to create a situation so crisis-packed that it will inevitably open the door to negotiation.” This sentence looks like a thesis statement and I wonder why he did not place it towards the beginning of the text, to get his point across right away. After thinking about this for a few minutes and rereading several pages from our class textbook, I think he leaves his “thesis” till later in his piece because he is facing a notso-friendly (if not hostile) audience. Delaying the thesis and laying out some background information and evidence first helps a writer to prepare his or her audience for the coming argument. That is another strategy I should probably use more often in my own writing, depending on the audience I am facing.

Critical Readers Do not Read Alone and in Silence

One of the key principles of critical reading is that active readers do not read silently and by themselves. They take notes and write about what they read. They also discuss the texts they are working with, with others and compare their own interpretations of those texts with the interpretations constructed by their colleagues. 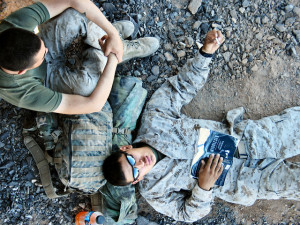 Most college students are probably used to taking notes of what they read. For example, some people my prepare for a test by reading a chapter or two from a textbook, then closing the book, then trying to summarize what was read on a piece of paper.

But that kind of study strategy is not an example of critical reading. Simply summarizing concepts from textbooks or lecture notes is not critical reading. Reading for information and trying to extract the main points, is not conversing with texts, because the reader is not questioning them, and summarizing does not involve connecting the reading with one’s personal experiences or pre-existing knowledge in any way.

Critical reading has other goals, one of which is entering an on-going intellectual exchange. Therefore, it demands different reading strategies, approaches, and techniques. One of these new approaches is not reading in silence and alone. Instead, critical readers read with a pen or pencil in hand. They also discuss what they read with others.