Artful figure presentation takes some practice to master, but two basic categories—a simple figure and a complex figure—provide for a useful starting point.

Figure 1. Floor heater stirring up dust in an enclosed cab.

Complex figures are handy when we want readers to compare multiple pieces of information or to establish analytical relationships among parts. The complex figure and corresponding text that follow were published in the proceedings of the year 2000 Conference of The International Emergency Management Society. I chose this figure because, as often occurs in papers, it is effectively introduced at the end of a paragraph describing its function, and because it includes a thorough, descriptive caption.

This figure is especially useful because it visually aids us in understanding the possible relationships among various players in a rescue operation—something that would not easily be described by text alone. Given that the viewers of the figure are intended to understand human movement and interactions within two different field areas (an “area of operation” and a “command post”), depiction of these interactions greatly simplifies our understanding and connects us to the place of activity better than text alone could.

To analyze command and control in rescue operations, we need to capture the temporal aspects of the interaction between the command post and the units in the area of operation. Figure 1 illustrates the data collection needs and the applicability of the corresponding support tools. 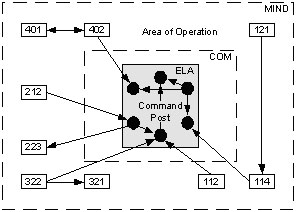 As this sample figure demonstrates, the caption to a figure, especially a complex one, can do far more work than just identify the nature of the picture. The caption can describe the trend being demonstrated, can explain to the reader how to view the figure, and can build on the text within the paper beyond the figure caption (thus the references in the example to ELA and MIND).