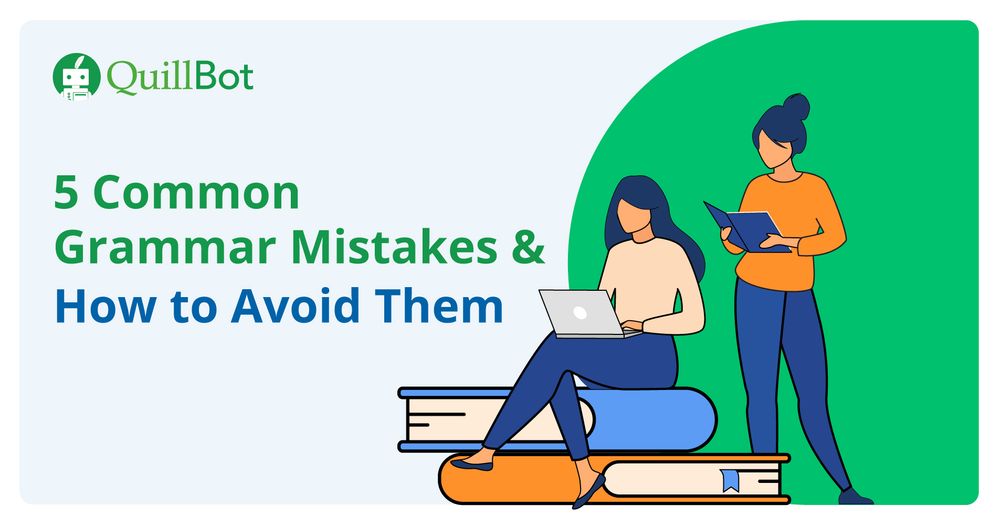 Grammar is one of the most frustrating (and thus, most feared) aspects of writing. It can feel arcane, unclear, and just a pain in the neck. There are even areas where there’s no clear agreement━ask a writer if they use a serial comma and you’re sure to spark a heated debate (1)!

A large reason why grammar has this reputation is because of the litany of rules, and because there are a lot of easy grammar mistakes that can make or break how well something reads.

In the course of my own writing, and reviewing that of others, I’ve run into a lot of various blunders, minor grammar errors, or unclear decisions. But I’ve found that if you are able to avoid a few very common grammar mistakes, it really cuts down on the amount of errors that you have to fix in your work.

So, without further ado, here are ten very common mistakes that you should keep your eyes open for when writing.

This, to me, is one of the most common grammar mistakes that I see that even native speakers can get confused over. While apostrophes are a frequent issue for people, getting “its” vs “it’s” is much more frequent and undiscussed as compared to the next section.

To know which one you should use, remember: “it’s” is a contraction of “it is”, while “its” is a possessive referring to something that was already mentioned. I find that almost always, if you expand “it’s” to “it is”, you can tell if you’re using the right one.

A lot of ink has been spilled on these three words, so I’ll keep this section briefer. What’s important to remember here is what each of these words refer to:

The trick I mentioned for “it’s” can help here sometimes, but things you can ask yourself to help make sure it’s the right word include: Is this referring to something a bunch of people own? Is a location involved?

Be sure to check exactly what the word is referring to and this will help you avoid any confusion.

3. Unnecessary commas (especially before the word “Because”)

This one can be a bit contentious, because some people feel it’s more of a stylistic decision. There are also a massive amount of errors that can be covered regarding commas. Garner’s Modern American Usage spends about 2 dictionary sized pages on the subject!

For the sake of brevity, I’ll focus on one that appears quite frequently: commas before the word "because." See the below sentence:

“I ran to the store, because I needed to buy peppers.”

The comma in the example is a mistake and is unnecessary━it’s not separating anything that needs to be separated. The word “because” serves as a subordinating conjunction and links the two parts together.

This grammar mistake happens a lot because people are told that commas can represent a pause in speaking, but in this instance it doesn’t belong.

To avoid this, my suggestion would be to not do it altogether━it’s extremely rare for it to be considered acceptable and even then it would likely sound better if rephrased.

I would say this is less common than the others, but I’m including it here because when it does appear in writing, it’s jarring; this grammatical error can really derail whatever you were trying to communicate to the reader because of how distracting it is.

An example of this grammatical error is below:

“The actors is performing a play today.”

The subject, “the actors,” is plural; however, the verb “is” is singular. This is the crux of the grammatical error: the subject and verb aren’t both singular and instead mismatch.

There are two ways to avoid this I find useful. The first is making sure you know the subject of your sentence and can match the verb to it. The second is just reading the sentence out loud: a lot of times, a big error can be really noticeable if you hear it being spoken!

This is one of the most common grammatical errors of all time (I had a lot of issues with this myself when I was writing).

In writing, there is an “active voice” and a “passive voice.” These refer to two different ways a sentence can be structured:

The passive voice isn’t necessarily incorrect in all circumstances; it’s very useful if you’re trying to emphasize the object of the verb (“My boyfriend was attacked by a dog!” has a different emphasis than “A dog attacked my boyfriend!”, for example).

However, overuse of it generally feels as if the writer isn’t confident in what they’re saying, or can just read bizarrely. See if you can tell the difference:

The latter sentence is clearer and sounds more confident. Try to use the active voice whenever possible!

6.  Excessive Use of Adverbs

An adverb is a word that describes a verb, or how an action is completed. They are the counterpart to adjectives, which describe nouns.

Most adverbs end in -ly, which makes them easy to spot. Some examples include happily, clearly, easily, and angrily.

The problems start when you use too many of these words. Many experts view adverbs as a crutch and signifiers of lazy writing.

""I hate you," he shouted angrily," is lazy writing. We want the writer to show us that he's angry so we know and see this emotion without being told about it.

A better way to write that sentence would be, "He slammed the door in her face. "I hate you!"" The exclamation point at the end of "I hate you" and the slamming of the door show the audience that he is angry, rather than telling them.

A comma splice occurs when you try to use a comma to join two separate independent clauses. Basically, you're attempting to use a comma where you should be using a period (or a semicolon, if you prefer).

Here are examples of the comma splice:

There are 3 ways to fix a comma splice and to join two independent clauses correctly:

The lack of punctuation in a run-on sentence can result in confustion. Without knowing where to stop or take a pause, it can be difficult to know what the focus or subject of the text is supposed to be.

I forgot to turn in my homework there isn't a penalty for not turning it in I just don't get points.

Here is that same run-on sentence, written in the way it is meant to be written:

I forgot to turn in my homework. There isn't a penalty for not turning it in. I just don't get points.

Don't use more words than you need to use to get your point across. This results in redundancies and inefficient writing / storytelling.

The English language has more than enough words to choose from in order to get your point across in an efficient manner. Your writing should be tight and to-the-point when applicable.

Here is an example of wordiness:

It is absolutely necessary to eat breakfast when it's morning time.

Here is that same sentence without the excess language:

It is necessary to eat breakfast.

"Necessary" is an absolute; the adjective "absolutely" is redundant. Breakfast is the meal that is always eaten in the morning, so "when it's morning time" is unnecessary.

I think it's obvious why this one is a mistake. Using the wrong word is, well...wrong. It does nothing but create confusion for your reader, which is why it's incredibly important to double check the meaning of each word and the context that each word is being used in.

Here are some fake and commonly confused words:

There are many words you can misuse and many ways to misuse these words. Whether it's confusing one word with another, not understanding the meaning of a word, or using the wrong form of a word, you're making a huge mistake.

But it's nothing a quick Google search can't fix.

While there are still many things about grammar to remember and watch for, hopefully this list and these tips and rules help you avoid some pitfalls so you have more energy and time for other things in your writing!