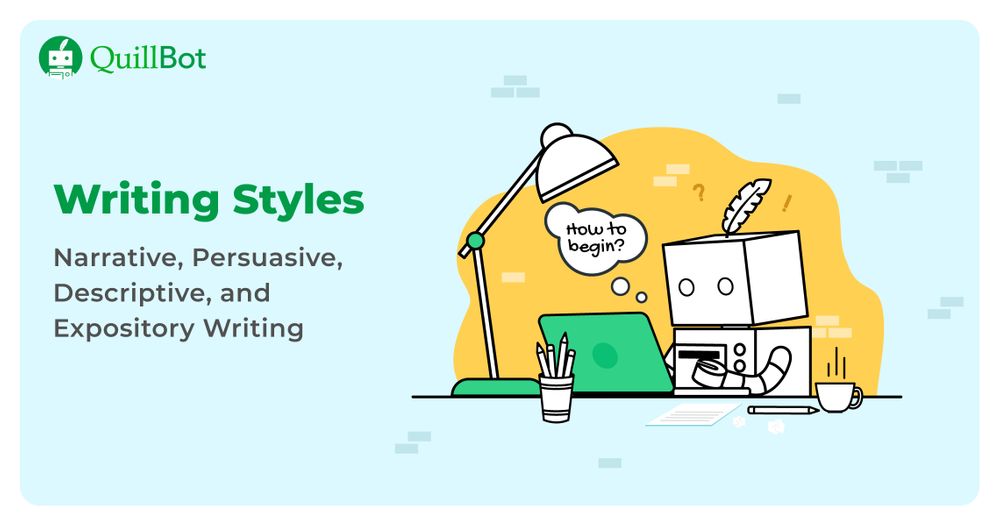 The world is saturated with readable content. With the advent of the internet came millions of blogs, posts, and online articles to compete for our attention in addition to the millions of novels, non-fiction books, essays, and journals that have been around for forever.

Although there are countless texts out there, spanning cultures, languages, and centuries, there are actually only four types of writing styles.

Well, the pop quiz just turned into a guided lesson. Let’s have a closer look at each of the four styles and go through some examples. We’ll take a deep dive into the definitions and appropriate use cases of each, and maybe have some fun along the way.

You’re on a long journey. Up ahead: a bridge. As you get closer, a troll scrambles out from beneath the rotted wooden planks. He points a gnarled finger at you and screeches, “Before you cross, I do implore: list the writing styles four!”

The odds of this happening are low, but you never know. Just in case you ever find yourself in this situation, here is the answer, laid out.

The four types of writing styles are narrative, persuasive, descriptive, and expository. Each of these styles has a particular purpose, so it’s important to match up your topic and goals with the correct style in order to properly convey your message.

The narrative writing style refers to any writing that tells a story, especially from the perspective of a character or personality.

Narrative writing can be fiction or nonfiction, as long as it tells a story from a specific point of view with a clear progression of events. This writing style typically uses a variety of narrative literary devices and writing techniques.

The most common narrative devices include:

Although narrative writing is usually chronological, the writing itself can be split into sections out of order, as long as the content in each separate section is still chronological. While chronologically written narratives are the most common, there are exceptions.

Quentin Tarantino’s screenplays are some of the most notorious examples of non-linear storytelling, including films such as Reservoir Dogs, Pulp Fiction, and The Hateful Eight. Although the events in these films aren’t presented sequentially as a whole, each chapter of the script is told from beginning to end, making them all examples of narrative writing.

There are also many examples of nonfiction narrative writing. When a particular person writes about the events throughout their lifetime, that collection of stories is called a “memoir.” Memoirs can serve as leisure material, or as first hand accounts of important events. Famous memoirs include A Promised Land by Barack Obama and Kitchen Confidential by Anthony Bourdain.
Narrative nonfiction doesn’t have to be memoir. Plenty of narratives exist from the perspective of biographers and third party writers. One of the most famous examples of this is Unbroken by Lauren Hillenbrand.

Any story written down by someone is an example of narrative writing. These stories can take the form of the following:

Most books and television are considered narrative, with the exceptions of guidebooks and reference books, and documentaries and news, most of which would be considered expository.

The persuasive writing style is defined as any writing that attempts to convince the reader into agreeing with the writer’s opinion. Persuasive writing is often used in order to get an audience to think or behave in a certain way.

Word choice is incredibly important in persuasive writing, with authors oftentimes using emotionally-charged diction to get the reader to literally feel what they are attempting to convey through words.

Persuasive writing uses three different rhetorical devices in order to convince the reader to buy into a goal:

Persuasive writing also exists outside of the marketing world. Usually, there is a “call to action” somewhere in the text, urging readers to make a behavioural choice. Examples include the following:

Descriptive writing differs from expository writing in that it can include opinions and relatives. Journal entries are a great source of descriptive writing that include both factual and opinionated writing. Someone writing in a journal might describe their day (the sky was blue, it was 84 degrees, the neighbor across the street was taking out their garbage) or share their thoughts on the events of the day (it was a beautiful day, it was too hot, the neighbor was rude and did not wave).

When descriptive writing is the focal point of a written text, it is called a poem. When the words of a poem are set to music, they are called lyrics. This means that any poem or song lyric can be an example of descriptive writing.

The expository writing style can be described as any text that is written with the purpose of informing an audience about a particular subject (hint: this article is expository).

Writing is considered expository whenever information is presented in a matter-of-fact way. This kind of text doesn’t have any personal opinion, storyline, or persuasive goal. Instead, the feature of expository writing is facts; these can be graphs, data, cited references, or quotes from real people.

Expository writing covers all written statements informing a reader about a certain topic. That means that any non-fiction book, report, or informational essay you’ve ever written or read is an example of expository writing. It also means that many of the observations you make or phrases you use are considered expository.

This type of writing is often very technical. Here are some examples:

Much of the text you encounter in your day-to-day life can be considered expository, which makes it one of the most popular writing styles around. It’s the menu at a restaurant, the manual for your car, the food labels at the grocery store. Any factual writing without bias is expository.

Narrative, persuasive, descriptive, and expository writing are the main four types of writing styles. However, they can be broken down into more specific types of writing that you may hear about more regularly.

Some of these types of writing styles include:

Can you match each of these types of writing to one of the main four styles?'

Usually the assignment you're given will let you know pretty clearly which style you should be writing in. If the assignment is to write a short story, it's narrative. A poem? Descriptive. An essay could be either persuasive or expository, but the goal of the essay will make this clear.

If you're still confused, read on.

How QuillBot Tools Can Help with Writing Styles

If your assignment is confusing, and you're not sure which style you should use, try inputting it into our Summarizer tool. The summarizer will give you the main points of the assignment without all of the extra language.

Maybe you've never written in a certain style before, and wouldn't even know where to begin. Our Paraphraser will give you different writing style options so you can decide which one best matches what you're trying to do (and once you get the hang of this, the Co-Writer is there to write alongside you, making sure everything sounds perfect).

Now when the troll comes calling, you’ll have the answer to his writing styles riddle. Writing purposefully in a particular style can give your writing more intent and strength, and identifying the different styles in day-to-day life can be a fun game to play. The more you know!